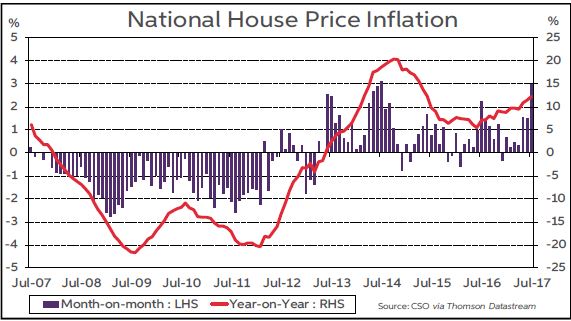 After slowing to 5.5% in June 2016, annual house price inflation has been on a strong upward trend since then. The CSO data on residential property prices show that the pace of growth has quickened over recent months. In July, prices rose by 12.3% on a yearly basis. This represents the fastest rate of growth since June 2015. Looking at the geographic breakdown, the acceleration in national house prices is being driven by a sharp pick up in Dublin prices. In July, prices in the capital rose by 12.7% compared to year earlier levels, quite some way above the 4% rate registered in July 2016. Meanwhile, non-Dublin prices rose by 11.7% in July, marking the first time since April 2015 that they have failed to outpace Dublin price growth. The fact that the supply shortfall is most acute in Dublin, where housing demand is very strong, the relaxation in the Central Bank mortgage regulations (which disproportionately impacted Dublin) and the Government’s ‘help-to-buy scheme’ are all factors underpinning the strong price rises in the Capital.
It is important to bear in mind, though, that despite these strong growth rates, prices remain below their previous peaks. Both National and Dublin price levels are around 26% below their previous highs. However in contrast, rents, according to CSO data, went above their previous peaks in September 2015 and as of August this year were 16.3% above their former highs. Aside from the upward pressure on prices/rents, the lack of su;cient supply is also reected in the fact that overall transaction levels remain well below the regarded 3-4% normal turnover levels. A further consequence of this is the impact on mortgage lending. It registered a strong 33% yearly increase in value terms in H1 2017. If strong growth is maintained in the second half of 2017, the total value of drawdowns in 2017 will be in the region of €7-7.5bn, up from €5.7bn in 2016. However, this is still quite some way short of the level in a more normalised market, where supply is substantially higher than current levels.

Supply on upward trajectory but still well below the required level 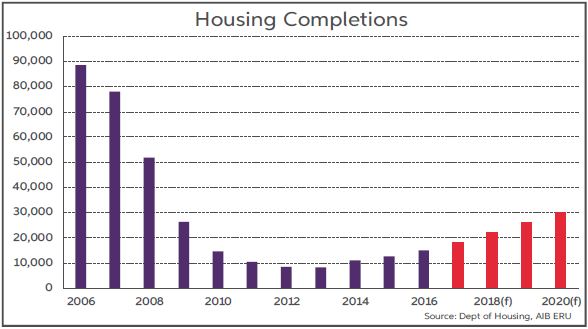 On the key issue of supply, various indicators suggest that building activity continues on an improving trajectory. Data from the Department of Housing show that commencement notices (i.e. housing starts) increased by 45% in the year to May. At the same time, housing registrations, which tend to reflect developer activity, surged by over 90% in year-to-date terms to July. Meanwhile, completions, as measured by ESB connections (an imperfect, but best available measure of new supply), were up 25% in the first five months of the year, compared to the same period in 2016. It must be noted though, that while all of the above are on the surface very strong growth rates, they must be viewed in the context of being off a low base. Thus, the overall level of activity/new supply remains low in absolute terms.

If the completions data continue to grow at their current rate over the remainder of the year, they would total in the region of 18,500-19,000 units for 2017, up from 15,000 in 2016. Crucially though, this level of building activity remains well below the projected 30,000 units that are required per annum to meet estimated housing demand. Indeed, extrapolating out current supply dynamics, it could be 2020, at the earliest, before new house building reaches the level of estimated annual demand. This does not take into account the pent-up demand that has been accumulating in recent years, amid the dearth in supply. Therefore, it could be well into the next decade before the Irish residential property market sees supply and demand levels become closely aligned.