Brexit uncertainty and Global corporation tax threaten a positive forecast for Ireland in 2018;

In the latest Friends First Economic Outlook ‘2018: Strong tail winds and some head winds’, published today Jim Power, chief economist at Friends First, forecasts full year GDP growth of 4.8% for 2017, an increase on the 4.3% guided earlier in the year and forecast by the Department of Finance for full year 2017 (Budget 2018). Power anticipates that real GDP could expand by 4% in 2018, slightly ahead of the Government GDP forecast of 3.5%.

The report notes that as we move towards 2018, the momentum in the Irish economy is strong and prospects for the coming year look promising and are boosted by strong tail winds from global economic improvements. However, the uncertainty pertaining to external factors such as Brexit negotiations, as well as global corporation tax developments present potential challenges to the Irish economy over the next 12 months. With a forecasted rise in house prices of up to 15% in 2018, an increase in housing supply is identified as a critical issue that must be addressed to safeguard from a surge in debt levels, which could threaten overall economic stability. 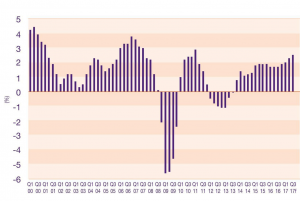 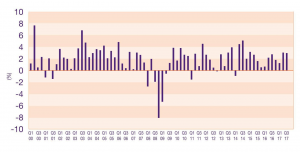 US GDP Year on Year 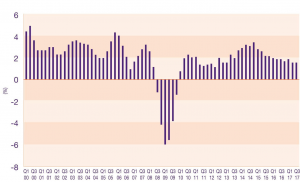 THE IRISH ECONOMY: Strong tail winds with some head winds

The report shows solid, broadly based growth momentum in the Irish economy during 2017. Consumer spending is noted to be improving with relatively high consumer confidence year-to-date, which has been supported by employment growth of 2.9%; average wage growth of around 4%; a modest easing of the tax burden; and growth of around 6% in personal disposable incomes.

Despite the recovery, the challenges facing Ireland in 2018 are clearly defined in the report. The principal factors include:

Commenting on this, Jim Power, Chief Economist with Friends First said: “It is clear that Ireland continues to enjoy broadly based growth. The global economic background is looking increasingly better and most domestic indicators are positive. For a small open economy like Ireland, the stronger global backdrop is very important and the world economy seems to be in the sweetest growth spot for a decade. Just as the Irish economy was taken down by the collapse in the global economy after 2007, it is currently being driven forward by the strong showing of the global economy over the past year.

With real GDP expected to expand by at least 4.8% in 2017, 4% in 2018 and an average of 3.5% per annum out to 2020, such an economic out turn would describe an economy gradually getting better over time. However, the domestic and external challenges will need careful management by policymakers as we look to 2018.” 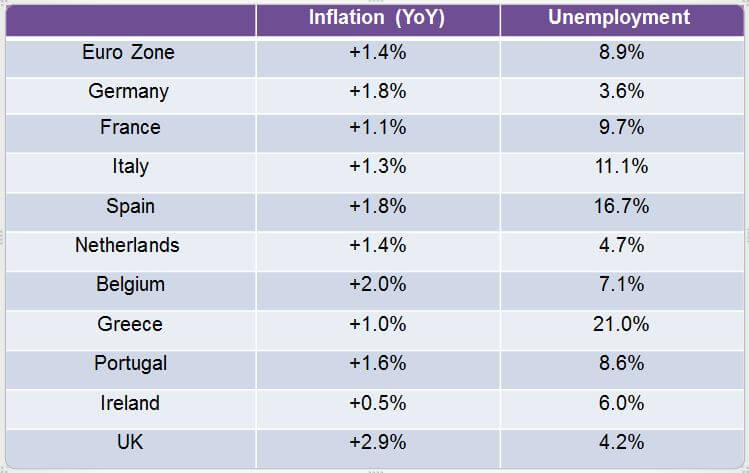 The views and opinions expressed in this article are those of the author.